eLearning and eCurrencies – a better marriage than Harry & Meghan? 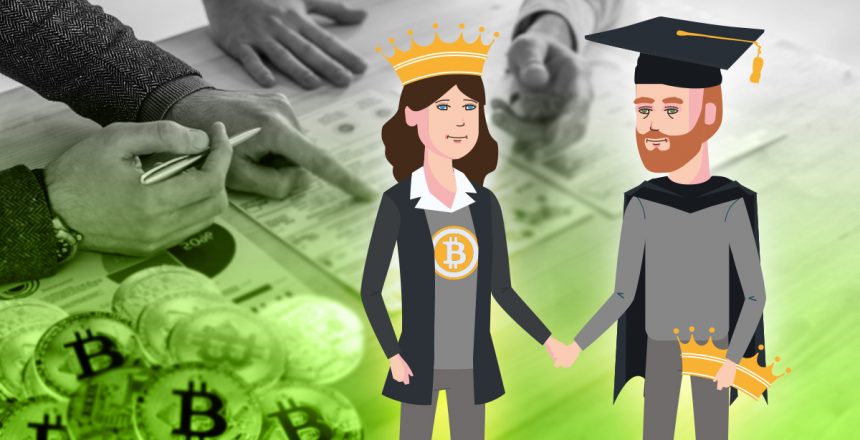 eLearning and eCurrencies – a better marriage than Harry & Meghan?

Far be it from us to jump on the show-biz bandwagon, but we couldn’t resist.

With all the fuss in the media at the moment about a certain royal couple, the thought about other, perhaps more suitable unions came to mind (no judgement here, at all).
Now, while they may not be as juicy or attention-grabbing, recent conversations with clients have led me to believe that a hook-up between a Blockchain technology company and a good eLearning agency might just tick that compatibility box.

Our conversations with clients have shown that there are a number of very real issues that the Blockchain world is struggling with at the moment. And not unlike the testing times that the Royal household is currently facing, there are similar issues that affect both:

Blockchain is still very much on the bleeding edge of technology and uptake. It’s spearheading a pioneer movement that’s peopled with geeks and prospectors (always an interesting combination). While it’s in this early phase of adoption, there are always going to be headwinds, bugs to be ironed out, errant, greedy, thieving opportunists to fight against.
Scams and fraudulent ICOs (Initial Coin Offerings) have meant that more and more restrictions have been placed on elements of the Blockchain commercial opportunity. Other similarities to the wild-west abound, with a huge lack of collaboration or coordination across the industry, as well as companies manically prospecting for new coins or selling and trading existing offerings for a quick buck.
Not the most calming of backdrops if you’re a respectable Blockchain company that’s trying to strengthen the reputation of an industry that could be the future of finance.

The reputation of cryptocurrency can be closely correlated to its value. The better the industry’s perception is to investors and other key stakeholders, the more chance there will be for wider acceptance, growth and acceptability.  eLearning can be enormously influential in helping the industry to spread the good news and chance of future opportunities.
In a similar way to the invention of the printing press, eLearning is adept as spreading a message far and wide – and in a way that is much more appealing, digestible and useful for its audience.
There exists a huge opportunity to build an educational platform, using eLearning, that can help the Blockchain companies to grow a new fanbase, or have existing proponents use the technology of eLearning to educate others or share ideas to develop the technology.

Blockchain currencies such as Bitcoin really hit the radar at the end of 2017 when its value soared to unprecedented heights. The resulting headlines led to a flurry of speculation as more speculators rushed in to invest. The subsequent price crash, together with a series of hacks and thefts from cryptocurrency exchanges all added to the confusion around the industry.
While many view the industry with huge amounts of scepticism, others are led by a more opportunistic lens and pick the headlines that best suit their own bias. All this means is that, as with most things on the internet, you’ll always find information that substantiates your viewpoint.

One of the main benefits of eLearning is its ability to cut through the confusion by presenting information in a way that is accessible, engaging and shareable.
Partnering with a good eLearning agency is a little like teaming up with a multi-functional PR and marketing agency, with a huge creative arm to boot. The right agency will be able to expertly distil your message and then, using their expert creative skills will incorporate eLearning elements such as explainer videos, microlearning and gamification to help relay the message to your audience.
Your information will become the hub for learning with an unlimited scope for use, as opposed to a one-off event, such as a press release or face-to-face training session, which both have limited applications and much less bang-for-buck.

The world of Big Data, once seen as the answer to every learner’s dream has quickly become a victim of its own success.
Big Data is a term that is used to describe a bank of information that is so vast and complex that it’s difficult to process using traditional methods. For many Commercial or Public applications, access to such data is a benefit. But for companies working in an industry reliant upon the accuracy of its information for reputational reasons – or need the data to be accessible to many, Big Data can be more of a hindrance than a benefit.
As we touched upon earlier, it’s possible to find anything online that substantiates your viewpoint. And with an ever-increasing volume of information about Blockchain and eCurrencies being put out there, the chance for more confusion abounds.

One of the key benefits of using eLearning as an educational tool is that it can help to deliver precisely what’s needed to your audience and in a way that is accessible, understandable and shareable.
A company that’s involved in any part of the Blockchain industry will know the type of material that’s needed to be shared, whether it’s about the benefits of your service, the growth of the industry or steps that are being taken to step-up regulation to reduce interoperability or lack of collaboration.
eLearning can be instrumental in delivering your message that helps to simplify information and educate the masses to the benefits of what you are trying to deliver.
The use of elements such as microlearning and explainer videos will really help to deliver this message in a digestible, logical sequence and would be powerful allies when selling the message of what’s being done to better the current situation.
Gamifying the output would also help to broaden the appeal, assist with stickability and ultimately increase the chances of the message hitting home with a growing fanbase.

The zeitgeist is a fickle friend.

Within every industry, there are a number of trends that come and go. Some remain and continue to influence the industry, while others remain as false prophets – never quite living up to the hype and failing to deliver value.
This has always been the case. What makes this seem more profound now is the fact that access to more information which may be shared quickly means that more people are now able to extract data and disseminate it at will. All this does is exacerbate the growth of unqualified perspectives, or false views and thereby adds to the confusion.
This is especially the case in the world of eCurrencies, where numerous parties jostle to be viewed as experts and to extract a bigger chunk of the spoils in this modern-day gold rush.
As the industry grows, realises its value and then standardises itself to be an established part of the finance sector, this will become less of an influential factor.
eLearning offers a unique chance to help by assisting companies by creating attractive, relevant and shareable content that will be consumed by a growing audience. The use of eLearning as a hub for information exchange means that companies wishing to educate and share a message will move away from the more traditional, inefficient methods of doing so (think of expensive face-to-face training sessions, or linear, non-interactive PowerPoint presentations)- and focus on a future-proofed approach that will grow with them as their message hits home with a larger audience.
So, does all this result in a better marriage than Harry & Meghan?  Only time will tell, but we think that the partnership between eLearning and eCurrencies shows great potential for long-term bliss…

Subscribe to our newsletter
Keep yourself in the loop – join thousands of other learning
professionals who receive eWyse industry updates.

Subscribe to our newsletter
Keep yourself in the loop – join thousands of other learning professionals who receive eWyse industry updates.